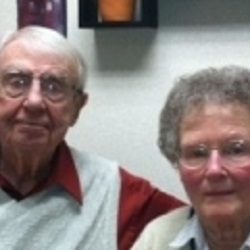 We were looking for a first class senior living community. We did not want to downsize into a small apartment. We also did not want to worry about preparing one meal on our own each day, but we found many retirement communities offered only two meals a day. We knew Proctor Place was the only local senior living option that provided the first class living we wanted with all the amenities we expected.

Jack’s grandfather, John David Dixon, moved to Peoria from Bluff, Illinois where he owned and operated grocery stores. In 1896, he got into the commercial fish business.

After some time, Jack’s grandfather tried another type of business. Despite this, the commercial fish business still seemed promising. John’s sons, Ross and Frank, took over the business and renamed it Dixon Brothers.

The business faced challenges. A combination of the addition of railroads, the pollution of the Illinois River and a decrease in business due to WWII, served as a catalyst in nearly shutting the business down. Despite these challenges, Jack and brothers Robert and Donald made a decision to stick together and make the business work. The brothers began selling fish commercially to taverns and small retail stores.

Hard work and dedication paid off. Today, the company provides seafood in St. Louis, Des Moines and the Quad Cities. They also have a distribution plant in Indianapolis and two retail stores in East Peoria and Peoria.

Each of the brothers has a son, and these boys are now fourth generation owners of Dixon’s Fish Market. Jack and Betty’s daughter, Debra, is referred to as the “Mother Hen.” She is known as having a great business sense. A fifth generation is already making its way into the business now.

A picture of the Dixon Fishery Packet Boat Sternwheeler hangs today in the Proctor Place auditorium. Plus, the business is featured at the Peoria Riverfront Museum, a nod to the Dixon’s contributions to the Peoria area business community.

When Jack and Betty wanted to find a senior living option that met the same high standards of excellence that they built in their business, Proctor Place was a perfect fit. It also helped that they had several friends living here already, reminding them just how much they would love living at Proctor. Today, Jack and Betty know just how right their friends were!