Proctor Place is a Life Care retirement community that has served the Peoria area since 1906. It was founded by Peoria philanthropist John C. Proctor. 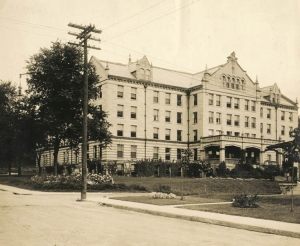 In 1976, the Home was re-located to its current location on Reservoir Boulevard.

The Home is governed by the Trustees of the John C. Proctor Endowment and is operated in accordance with Mr. Proctor’s Last Will and Testament. The Endowment is a not-for-profit organization. The Trustees, along with the Home’s dedicated staff, are committed to the “Proctor Promise.”

The Proctor Promise is a commitment to care for our residents for life. It is a pledge to put each resident’s physical, mental, and emotional well-being first, every time. It is an assurance to make this a senior living home each resident values and enjoys. It is a dedication to grow, improve, and always make life here better for all.

It is our promise made to every resident since 1906, and a promise we will make to generations of future residents. We offer Life Care services which include dietary service, laundry, housekeeping, plenty of activities and nursing care for as long as residents live here.

The following is a list of significant events in the history of Proctor Place: