Our History Sets Us Apart

A biography written on John C. Proctor in 1902 described him as a man of excellent judgement, generous to charities with a calm and pleasant personality. If we make a life by what we give, he certainly made a wonderful life for himself and others. Over 100 years later, his generosity lives on.

John Cleveland Proctor was born on his father’s farm in Henniker, New Hampshire, on October 11, 1822. At the time of his mother’s death he was the youngest of five children and not quite 3 years old. His father remarried twice, taking his third wife when John was 5 years old. Four more children were born after this marriage. When John was 14 his father died and his stepmother eventually remarried.

Several old letters which John and his several brothers sent to each other survive and they reveal that the brothers were educated in the various private academies in Henniker and nearby towns, there being no system of public education at the time. The oldest brother, Isaac, stressed the importance of getting an education in his letters. He studied medicine at Dartmouth College, eventually moving to Mississippi to practice his profession. The three younger brothers continued their schooling and also worked at various retail stores in the area, continuing to exchange letters. When he was 16, John was working in one of these stores and enthusiastically wrote his brother, Allen, about his work there with details about the merchandise that the company was buying for the fall business season, the competition they faced, and the fact that they were selling five to six hundred dollars’ worth of goods a day. This was an important part of his practical education.

In 1841 he moved to Mississippi where he joined Isaac. The next year he decided to move to Illinois. He taught school near Canton for a time and then, in 1843, he joined his two brothers, Allen and Francis, who had moved to Peoria in 1840 and 1841.

Allen and John manufactured fanning mills, used to winnow grain. The business prospered but in 1850 John saw an opportunity to engage in a retail lumber business which eventually became the John C. Proctor Lumber Company. He prospered in that work as well. During the Civil War, Congress passed the National Currency Act of 1863 which established a national banking system. John and 41 other citizens of Peoria agreed to form a new national bank which opened for business as The First National Bank of Peoria on December 26, 1863.

John was named one of 9 directors of the bank. In 1875, during a severe economic depression, Hervey Lightner, the bank President, resigned and Mr. Proctor was elected as his successor. According to a history of the bank, Charter No. 176, written by Theo Jean Kenyon in 1963, John Proctor knew no fear. All the other banks in Peoria had disappeared; the economy hit bottom but First National survived. In the next 18 years John Proctor remained as President and, under his intelligent leadership, the bank built up a healthy surplus of reserves and was ready for the next economic Panic of 1893 which was also successfully weathered. John remained as President until he retired at age 84 in 1906.

John never married and lived nearly his entire time in Peoria at the home of his brother, Allen, and Allen’s growing family. His investments, including several farms in Illinois, prospered and in 1883 he was able to donate enough money to purchase a building and the equipment for a 100 bed hospital on Second Street called Cottage Hospital. Later he donated property to build a brick addition to the original frame structure, to establish a nursing school and to endow the hospital with several properties which provided income for the hospital. After he died the name was changed to Proctor Hospital in his honor. 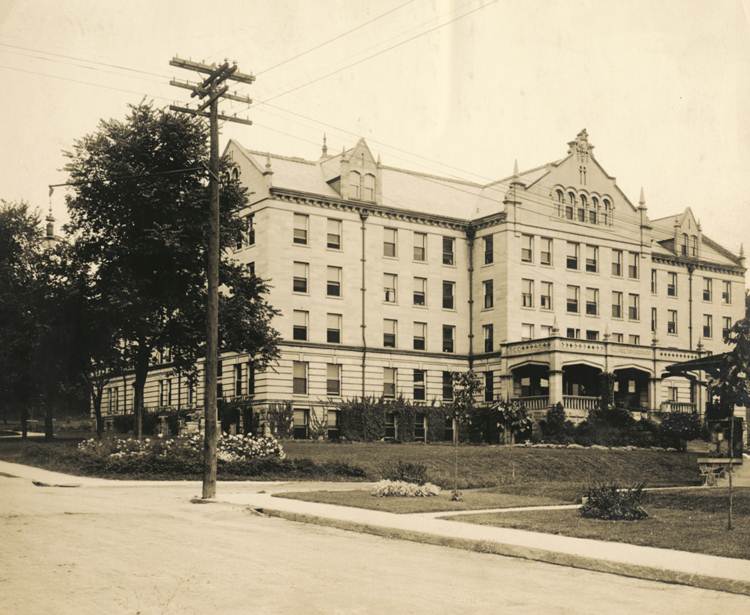 Mr. Proctor made his will in 1904 in which he established the John C. Proctor Endowment. He built the original Proctor Home on Spring Street in 1906, before he died, and moved into the Home as one of the first residents after his brother, Allen, died in April, 1907. In failing health, he lived only a few months before he died on June 22, 1907. The first Board of Trustees named in his will included one nephew, Charles S. Proctor, son of his half-brother David, and six other business associates and friends, some of whose families still live in the Peoria area: John S. Stevens, Oliver J. Bailey, Rudolphus R. Bourland, Frederick F. Blossom, Aaron S. Oakford, and his associate at First National, William E. Stone, Jr.

In a short speech by Miss Eleanor Coolidge, the first superintendent of the Proctor Home, on an occasion in 1930 celebrating John Proctor’s birthday, she said, “I knew Mr. Proctor well, as Superintendent of the Cottage Hospital to which he had given so much and in which he was so interested. He was always much interested in those who were sick and needed special care and attention. I remember once he was going down Franklin Street and he saw a crippled boy about four years old, dragging himself around the yard on a little bent leg. Mr. Proctor came to me and said, ‘You get that child and see what can be done for him.’ So I did, and we found he had tuberculosis of the knee. He stayed in the hospital several months and became a great favorite with all of us. He got entirely well; although he had to use a little crutch, he could walk as fast as any of us.

“Mrs. Kinsey was greatly interested in collecting funds for a Soldier’s Monument—the one which now stands in the Court House Square. She went to Mr. Proctor expecting to get a substantial donation. He gave her a small amount for the monument; then he gave her a small roll of bills, nearly $100, and said, ‘Now you take this up to the hospital for a child’s bed.’ So she brought it to us and we were very glad to have it; but she (Mrs. Kinsey) wasn’t so pleased.

“Mr. Proctor always wanted to get the best materials in anything he bought, and when he built this Home he wanted all the materials to be of the best, good and substantial. They were good. Once he showed me a pocket knife he had; he said, ‘You see this knife? I bought it fifty-two years ago. I got the best and it has lasted all these years.”

“Mr. Proctor did not think it was good for young people to have too much money. He helped many young people, but said children of wealthy families usually amounted to nothing.

“I knew of several instances when he held a mortgage on a house and people couldn’t pay; and so Mr. Proctor did not foreclose the mortgage (although it might have been long overdue) but he bought the house from them at a good price—just what they asked.”

Julia Proctor White, daughter of Mr. Proctor’s brother David, remembered her uncle as a man of few words, very reserved and shy, but one who enjoyed good company. She said that he had no patience with people with low standards of conduct. He believed in helping young people who were worthy; who showed ability, energy and persistence. He helped many students pay for schooling and helped many start in business. His help was given quietly and few, other that the recipient, knew of it.

So a boy who loses his father and mother at a young age, who relies on the advice and love of his brothers and sisters, joins in the westward migration of so many New Englanders and settles in a small Midwestern river town. He is honest and hardworking and achieves enormous success in his work and life, contributing greatly to the success of his adopted home city. Without him Peoria would be a very different city, even today. The Proctor Endowment, which established the Proctor Home as well as the Proctor Recreation Center, now operated and owned by the Peoria Park District, and the Proctor Hospital would never have come into existence without John Cleveland Proctor and his generosity.