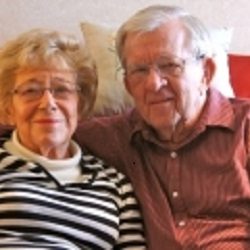 My late husband Paul wanted us to be at Proctor Place so I would be taken care of if something happened to him. My Proctor Place family did take care of me, especially emotionally, after Paul passed away, helping me heal and move forward.

I’m glad I did because I met Hank, my second chance at happiness. Hank’s wife had passed away so he moved in to leave behind the stresses of housework and cleaning.

Neither of us ever guessed that our decision to move into Proctor Place would also bring us so much added love in our lives.

Paul and Lori Wilcoxen were married 57 years when they decided to move to Proctor in 2005. Lori began her life in Italy, migrating to the U.S. when she was seven. Paul grew up in Lewistown, Illinois, after his mother passed away when he was three. Lori was a dental assistant for 42 years. Paul worked at Keystone Steel for 28 years before retiring in 1977.

Their life together began years earlier when they married in 1948. Eventually, they built a dream home in Peoria where they lived for 45 years before moving to Proctor. The couple enjoyed travel and playing bridge. In 2006, Paul passed away. In her heartbreak, Lori said there wasn’t one thing she would change about their life together, and could not imagine marrying again.

Hank Rahe moved to Proctor in 2010, but moving wasn’t something new for him. After all, Hank had moved 42 times during his lifetime, between times in the military and job transfers. Moving was something he was used to.

So when his wife Helen developed health problems, the couple made the easy decision to return to Peoria and be near their daughter. Hank lost Helen when she passed away in 2007. A few years later, Hank moved to Proctor.

The story of Hank and Lori

The first time she saw him, Lori remembers believing that Hank must have just been visiting because he looked way too young to be retired. After not seeing him again for a while during meals, she tried to put the attractive man out of her mind.

What she didn’t know was that Hank was spending winters in California. In the spring, Hank returned to Proctor and soon the two were joining each other for meals. They quickly learned that they laughed easily, had a lot in common and truly enjoyed each other’s company. It wasn’t long before they were married, on October 22, 2011.