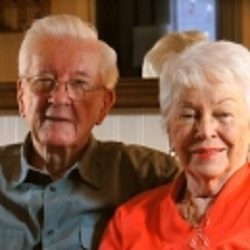 Bill and Loraine knew there was no other senior living option that offers asmany ameneties as they would be able to enjoy at Proctor Place.

Three meals a day, full housekeeping and laundry services along with more activities available than other local retirement communities were the reasons that made their decision.The extra bonus they had not imagined was finding comfort in each other ina new chapter of their own happily every after.

Jack and Loraine Gift moved to Proctor in 1997. They were blessed with four daughters and a beautiful life together. Jack was a civic leader, and was voted by the Peoria Chamber of Commerce as “Man of the Year” for his hard work and dedication to the Peoria area. Unfortunately, just a month after moving to Proctor, Jack passed away. Loraine was sad to begin this new phase of her life alone. Jack’s mother was longtime resident of Proctor, and the couple had planned to enjoy retirement here together.

Loraine carried on as an active member of the Service League of Methodist Medical Center and as an Elder at First Presbyterian Church.

Bill and Barbara Bunker moved to Proctor Place in September 1999. They were also blessed with four children: two sets of twins. Bill was a 10-year Lieutenant in the Navy and had a successful career at CAT as a technical writer. To know Bill, it’s no surprise he volunteered at the Visitor’s Bureau downtown kiosk for seven years. It was this same friendly personality that Bill and Barbara both shared and led them to invite Loraine to join them for lunch after her husband passed away.

Over lunch, they discovered a shared love of movies. Soon, the three decided to begin a small movie night at Proctor and invited everyone to attend. Their small movie nights turned out a crowd of more than 50, and the tradition of Movie Night continues today.

Unfortunately, Barbara passed away in 2002. Although Bill knew she had health challenges, it was a difficult time for him because he didn’t fully realize just how her health had worsened.

The Story of Bill and Loraine

As Bill moved forward, he and Loraine continued the weekly movie night tradition the three close friends had started. Soon, these two friends were spending more and more time together, growing their friendship by supporting each other. Pretty soon, they were inseparable, and wanted to be together more than apart. They were married on June 5, 2004. Residents and friends waited two hours in line at their reception to congratulate them. They treasure each other, their families and friends as much today as that day.