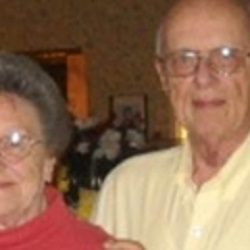 The Beck’s family represents a long standing tradition of hard work with a focus effort on excellence. It is that focus on excellence that has kept the Beck’s family coming back to Proctor Place. Bill’s mother living at Proctor Place for 13 years so when it came to senior living communities, Bill knew this was the only option he needed to consider.

Bill is the third generation of family business owners to continue this long tradition of excellence in the Peoria floral industry.

Bill’s grandfather, Joseph Holtschlag, came from Essen, Germany and started his own florist business in Quincy, Illinois. This entrepreneural spirit was passed onto his daughter Agnes who eventually married Bill Becks, Sr., Bill’s father. Back then, Quincy wasn’t big enough to support four families in the floral industry, so Bill’s parents moved from Quincy to Peoria. It was not as quick as making the move and opening the doors. Bill’s father worked at Caterpillar until 1934, when he had saved enough to purchase an existing greenhouse from a man who grew mostly sweet peas.

He took this small greenhouse full of sweet peas and transformed it into what Beck’s Florist is today. Bill grew up an only child, immersed in flowers and greenhouses, so it was no surprise that Bill began running the Peoria shop at age 21, when his father opened a new location in East Peoria.

Today, Bill and Joanie’s two sons, Greg and Victor, manage the business as the fourth generation owners. Bill is still close to the action.He stays actively involved in many parts of the business. It is their true passion. They have a warehouse in East Peoria, and two retail flower shops.

For Bill and Joanie, selecting a two bedroom independent living apartment in The Centennial made perfect sense. Bill’s mother lived here for 13 years, so the couple was familiar with the extraordinary care she had received. Years later, after hard work and dedication to their family business, we’re happy to have them part of our family. They’re here enjoying our Friday night happy hours in The Centennial, living the life they have been working for.